From Paris to Port Allen 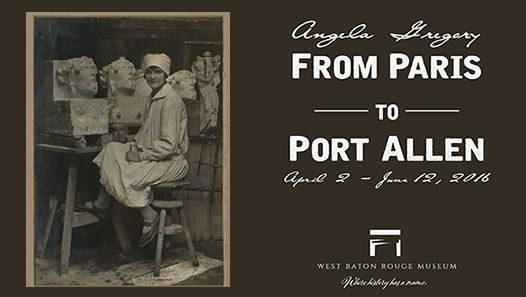 The exhibition, Angela Gregory: From Paris to Port Allen will be on display at the West Baton Rouge Museum from April 2 through June 12, 2016. The exhibit features the art and sculpture of Angela Gregory including her work on the Bienville Monument, the Henry Watkins Allen Monument, the Negro Project, as well as personal and religious works. On loan from the Newcomb Museum of Fine Art, the exhibit will also showcase Gregory's copy of the 15th century Head of Christ by Beauvais that she completed in the Paris studio of Antoine Bourdelle, the protégé of Auguste Rodin. Other pieces on display come from The Old State Capitol, The Historic New Orleans Collection, The Angela Gregory Estate, The West Baton Rouge Historical Association, and private collections.

Born in New Orleans, Angela Gregory (1903-1990) graduated from Newcomb College in 1925 and received a scholarship to study art at the Paris branch of Parson's School of Fine and Applied Arts. Once in Paris, she sought out Bourdelle with whom she studied for two years. Upon returning to New Orleans, she received numerous commissions throughout Louisiana and the United States including the Henry Watkins Allen monument in Port Allen.