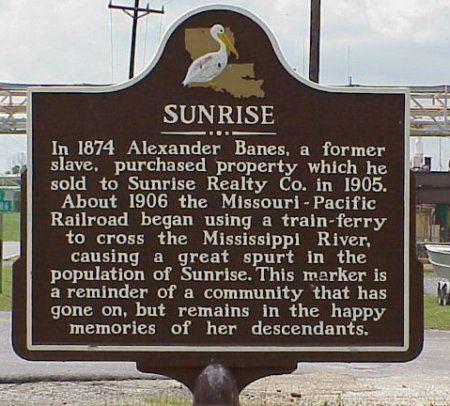 A place of green and golden pages turned slowly enough, to hear the bees whispering in the clover and smell the season of the river in the fog and dust. It must be there still in the trees and the spaces where people live and children play in barefoot memories.

In 1874 Alexander Banes, a former slave, purchased property which he sold to Sunrise Realty Co. in 1905. About 1906 the Missouri-Pacific Railroad began using a train-ferry to cross the Mississippi River, causing a great spurt in the population of Sunrise. This marker is a reminder of a community that has gone on, but remains in the happy memories of her descendants.

This was the oldest integrated neighborhood in the state. We went to segregated schools but we still played together, said Eloise Ferdinand Jack, a former Sunrise resident who was one of many interviewed by The Riverside Reader in 1996 about life in Sunrise. Former residents continue to hold reunions to keep in touch with their friends and families. Read their stories in The Riverside Reader.

Read resources and books to learn more about Sunrise: