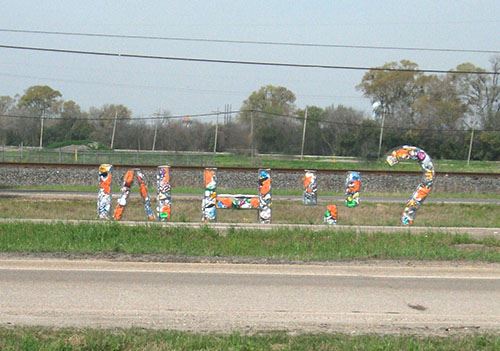 Did you know, 40 million dollars a year is spent on litter pick-up/removal every year, paid by taxpayers? Keep West Baton Rouge Beautiful funded a Litter Letter Project with the help of students from the Brusly and Port Allen welding class at Baton Rouge Community College extension in Port Allen.

Mary Delapasse, former Executive Director, came across the idea created by Rachael Hatley, a graphic designer in Washington Parish. Rachael initially created The Litter Letter Project for her Master of Fine Arts thesis which began in Louisiana and has since expanded the idea nationwide. The 3 dimensional messaging system of letters is constructed from chicken wire and rebar and filled with litter collected from the roads and highways. By displaying these large scale visual messages in public places the hope is to provoke response, thought and action.

We want to make people think about where they live and to care what it looks like. With this in mind WHY not bring it to West Baton Rouge Parish. Mary chose the word why?, because she never understood why people throw trash out of their vehicle. It is to bring an awareness of the litter problem we have in West Baton Rouge.

The letters will be displayed throughout areas of the parish. This is to make residents aware of the litter around them.